2017 has been a great year for Bodegas Piqueras, with lots of awards and prizes for our wines.

We have participated in the most important wine contests and events in the world, and our wines have earned recognition and awards given by rigorous juries and experts.

In the spring edition of the Berliner Wein Trophy, one of the most rigorous contests in the wine sector, Bodegas Piqueras won two gold medals.

In August of 2017 we presented our wines in one of the most important wine events in Asia. An event focused on new consumers, who increasingly consume more wine. Our wine Castillo de Almansa Selección 2012 won a gold medal in recognition of its quality. 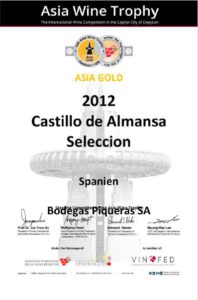 A prestigious contest that brings together the passionate for the great wines of the world: producers, tasters, consumers, distributors … In the last edition, held in Bordeaux (France), our winery was awarded with a gold medal for the wine Valcanto Syrah 2014.

The participation of Bodegas Piqueras in this contest was a success. We attended to the largest and most prestigious wine competition in the world and the experts and professionals of the industry gave to our wines different recognitions: 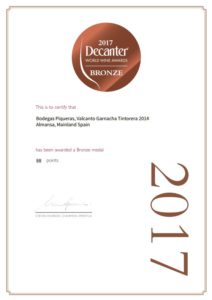 Castillo de Almansa Selección 2013, awarded with two golds and a bronze in 2018