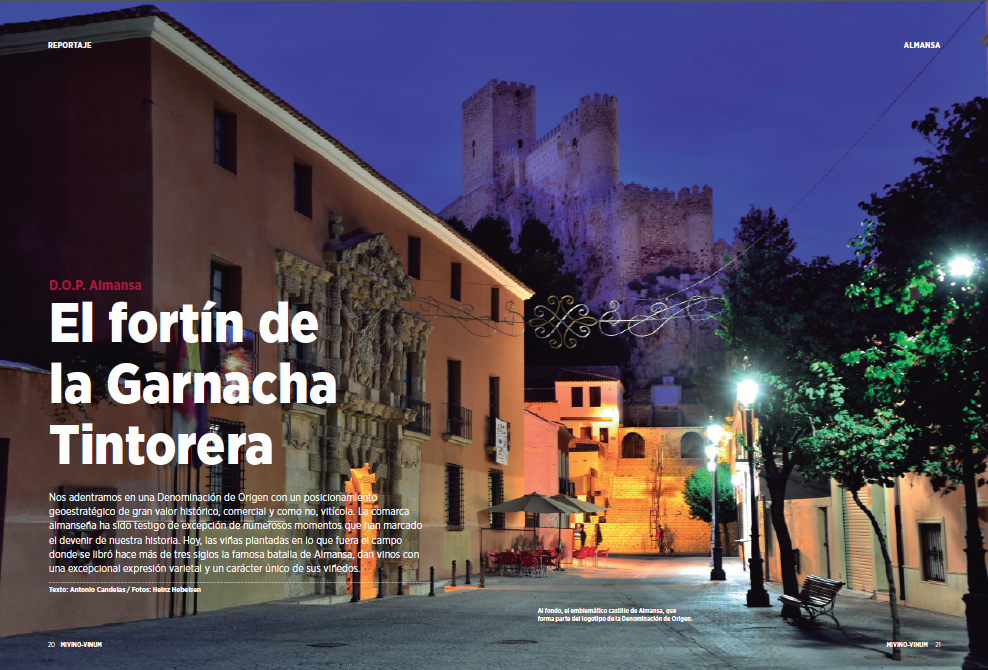 Posted at 13:17h in Events by Bodegas Piqueras
Share

Bodegas Piqueras and D.O. Almansa featured in an article in issue number 211 of MiVino-Vinum magazine in December 2015.

The article explored Garnacha Tintorera, the grape variety that is widely associated with the Almansa Denominación de Origen, and the value it brings to the D.O. in geostrategic, historic, commercial and, of course, winegrowing terms.

The feature also highlighted how tricky this grape can be, how hard it can be to identify the exact moment of perfect ripeness of the fruit. But here the altitude (with the vineyards standing at an average of almost 2,500 feet above sea level) and the combination of a Mediterranean and continental climate, is ideal for growing Garnacha Tintorera, so that it has come almost to be considered an indigenous variety.

Below is an extract from the MiVino-Vinum article, including what was written about Bodegas Piqueras, as a pioneering presence within the D.O.:

If there is one outstanding figure in D.O. Almansa, it is Juan Pablo Bonete Piqueras. At the helm of Bodegas Piqueras alongside his two brothers, he is an institution in the region as someone who knows most about the past, present and future of the D.O.

His maternal grandfather, Luis Piqueras, was lucky enough win a prize in the Christmas lottery of 1927. He invested this in the expansion of his small winery in the historic centre of this Albacete locality where it can still be visited today. At the time the winery only produced jug wine and it wasn’t until the 1960s that his son-in-law, Mario Bonete, father of the present owners, changed direction and in his farsighted way opted to bottle the wines. This was in the same decade that the D.O. was taking its first steps, under Mario’s guidance as the first president of the Regulatory Board. By a happy coincidence, as Juan Pablo pointed out, the very first bottle to come out of the bodega did so on the day that he was born, back in 1961.

Ever since then, this entrepreneurial spirit, which everyone claims to have nowadays, has been a characteristic of the family, with one clear view in mind: a commitment to a quality product at a keen price in order to reach the maximum number of people possible. Before 1973, not a single wine from the region had seen the inside of an oak cask, but then Bodegas Piqueras bought their first barriques with a view to producing oak-aged wines. The fruit of the work of all these years was the Castillo de Almansa family of wines, characterized by their undoubted quality and a love of travelling to new places that has led to their being present in some of the most difficult and far-flung markets, such as those administered by government monopoly in Canada and Scandinavia. It is odd to think that as far away as Alaska consumers can see pictures of the redoubtable Almansa fortress adorning the labels of this most well-travelled wine of the region. So much so, that Juan Pablo adds a thought-provoking detail. They are the leading Spanish wine exporters to Canada and Finland and 95% of the wines they produce are enjoyed beyond Spain’s borders. Even more to the point, he insists that they find it easier to sell a bottle of wine in the highly demanding Canadian market than in any main town in any of the provinces of Spain. I imagine that it is a stirring thought that a product that is born in the very heart of a region like Almansa should be enjoyed in the most out of the way places on the planet. Now we must all work towards making sure that Almansa wines are served more often at the bar counters of our own country’s bars.

They currently have 120 hectares of their own under vine and also buy grapes from their long-term winegrowers. This means that the winegrowers cultivate their vines according to criteria that the Piqueras family has long been adhering to and that there is a relationship of mutual trust. The year that is coming to a close marks the 100th anniversary of the winery and they have chosen to celebrate it by making a wine that is the fruit of the knowledge and the personal preferences of the family behind it.