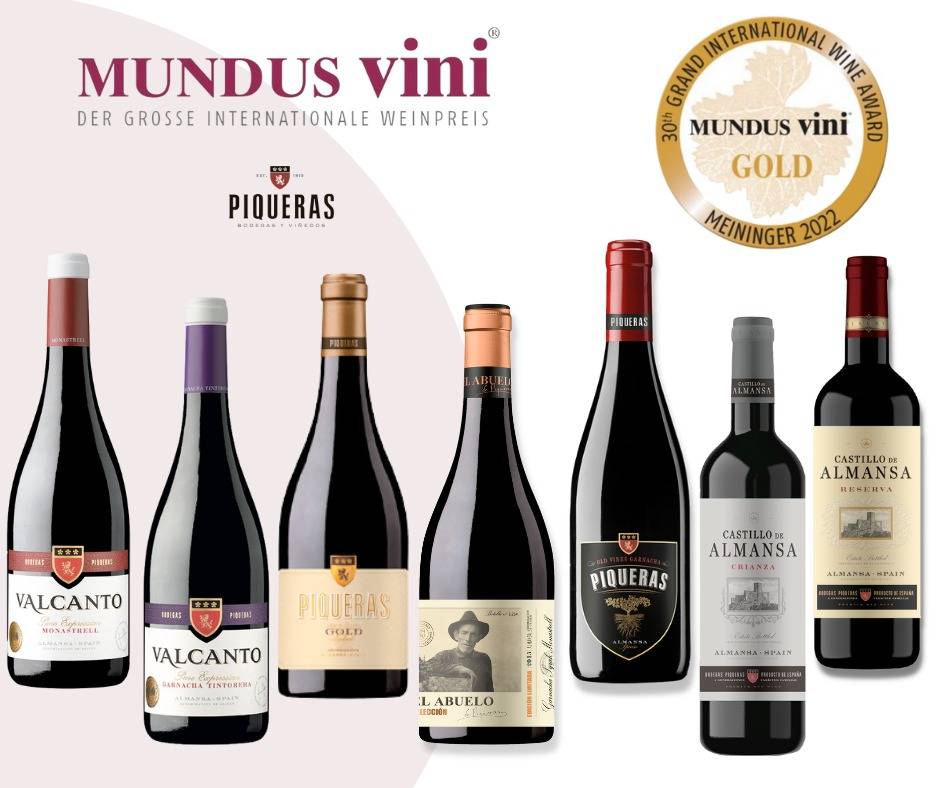 Bodegas Piqueras wines achieve a historic milestone by winning seven gold medals at Mundus Vini, one of the most important wine competitions in the world. At the 2022 event, Bodegas Piqueras earned seven gold medals and a diploma for the “best wine of the Almansa Denominación de Origen”.
Standing at the very top of the podium was our Castillo de Almansa Reserva, which, in addition to winning a gold medal, was also awarded the diploma as the best wine in our wine-producing area. Juan Cantos, winemaker of Bodegas Piqueras, highlighted the star quality of this red wine, which has already become “the most internationally recognised wine we have in our winery”.
Valcanto Monastrell, Castillo de Almansa Crianza, Piqueras Old Vines, Piqueras Gold Label, Valcanto Garnacha Tintorera and El Abuelo Selección were the other wines that were garlanded with gold medals. This Mundus Vini wine competition took place from 22 to 27 February in Germany.
These new awards come after last year’s awards were cancelled due to the pandemic. Before that, another golden “harvest” of awards had been garnered in 2020, when Bodegas Piqueras won three gold medals and two silver medals at Mundus Vini, while in 2019 it achieved two gold medals.
Since this competition first began in 2001, Bodegas Piqueras wines have garnered numerous awards, with over thirty medals overall going to our wines at Mundus Vini.
Juan Pablo Cantos underlines the importance of these awards for Almansa, especially in view of the fact that Bodegas Piqueras wines “are liked and enjoyed by more and more consumers from different countries”. Cantos adds that “as we know, the international context is complicated, and at Bodegas Piqueras we will carry on working hard so that our wines continue to achieve and build on the recognition achieved in recent years”.

The weeping of the vines

Three wines from Bodegas Piqueras score over 90 points at the Decanter World Wine Awards, the best result in the history of the winery