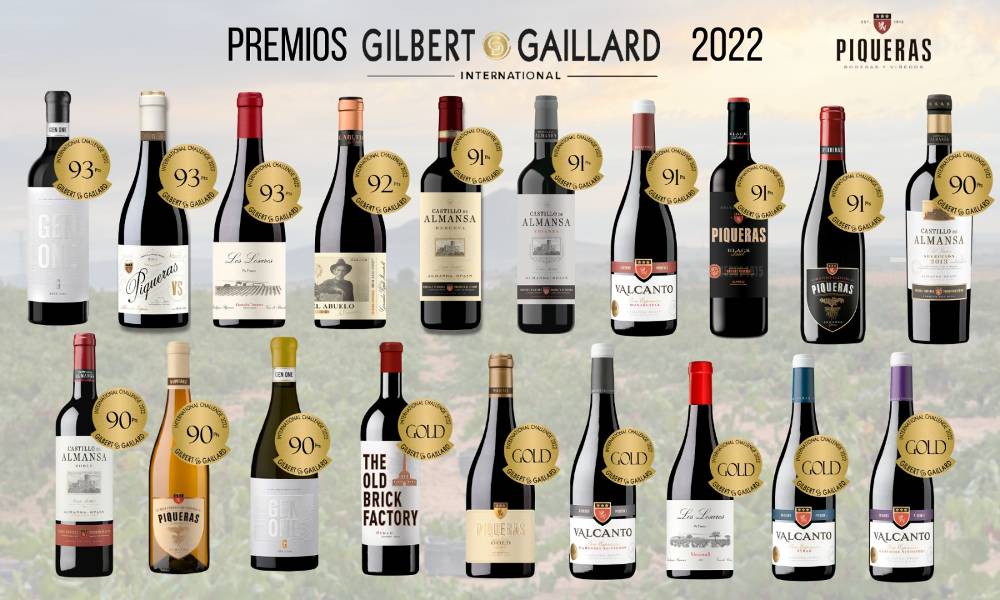 Bodegas Piqueras achieved a historic result at the Gilbert & Gaillard wine magazine International Challenge, one of the most prestigious events in the wine world. At this year’s event, our wines won 19 medals, including thirteen “Grand Gold” and six “Gold” medals. As a result, these awards represent the highest achievement in terms of medals for Bodegas Piqueras at a single competition, surpassing the 10 medals won at Gilbert & Gaillard in 2020.

GEN ONE Tinto, Piqueras VS and Los Losares, 93 points

This time round three of the premium wines from Bodegas Piqueras achieved a rating of 93 points at Gilbert & Gaillard: GEN ONE Red, Piqueras VS and Los Losares Garnacha Tintorera. Additionally, El Abuelo Selección, which last year was the wine with the highest score, again scored highly with 92 points.

Juan Pablo Cantos, winemaker at Bodegas Piqueras, considers it “excellent” that these three wines have achieved such a high rating “because right now, and bearing in mind the importance of wines such as Piqueras VS and Los Losares for Bodegas Piqueras, they are also being appreciated and achieving significant success all over the world despite having been commercially available for only a short time.”

GEN ONE Red was singled out for praise, with Juan Pablo Cantos celebrating “further proof that our single vineyard wine par excellence, which has only been on sale for a few months and which has been a real labour of love for the team of professionals at Bodegas Piqueras, is succeeding in winning over the most demanding palates both within Spain and internationally”.

GSM wines: a perfect match of Grenache, Mourvèdre and Syrah

How to pour the perfect glass of wine