Almansa Castle is the Moorish fortress that, ever since the 13th and 14th centuries, has watched over the fortunes of the town of Almansa, the historic and economic powerhouse of the southeast of the Iberian Peninsula. Since as long as 1972, it has also been the symbol of the best-known range of wines produced by Bodegas Piqueras. 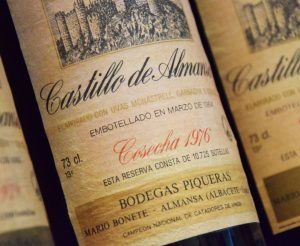 The history of the “Castillo de Almansa” brand starts with the purchase of the first oak casks by the winery as it set out to make higher quality wines, at a time when those at the helm of Bodegas Piqueras were looking to establishing a new brand. All eyes turned to the best-known landmark of the area. The first thing to do was to get permission for the “use” of the fortress from Almansa Town Hall, and then to register the brand which was to appear on the label of two types of red wine: Castillo de Almansa “3 años” (3 years) and Castillo de Almansa “5 años” (5 years), referring to the time spent in cask, which would in time come to be known as “Crianzas” and “ Reservas”.

Three years later, in 1975, the fortunes of “Castillo de Almansa” improved dramatically when Mario Bonete, at the time a qualified winemaker, was awarded the top prize at Spain’s National Winetasters’ Course. In the same competition, “Castillo de Almansa” was acclaimed champion of Spain by the winetasters. Bodegas Piqueras owes to the brand its move into making wines of higher added value, which were a revelation in terms of the wine region, and which also enabled us to take the name of our town into markets around the world. It should also be said that the labelling and image of this range of wines has borne witness to the evolution of “Castillo de Almansa”, keeping the Almansa fortress as its flagship throughout these years, not only for its red wine range, but also the white and the rosé ranges. You can follow the journey of our historic label in this video:

The Netherlands and Canada, pioneer importers of “Castillo de Almansa”

With a history now stretching back more than forty years, the first countries to which “Castillo de Almansa” was exported, back in the 1980s, were the Netherlands and Canada. These two destinations were key factors in the bringing on board of further markets, countries and consumers in Asia, Europe and North America. So, step by step, the “Castillo de Almansa” brand has garnered a host of prizes and awards around the world, with pride of place going to the achievement of being the best-selling Spanish wine in Canada for ten years. 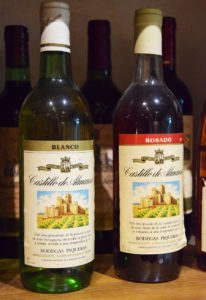 Last year saw a more recent landmark for this wine, as Castillo de Almansa Selección 2014 won the “Grand Gold” medal at the prestigious “Concours Mondial de Bruxelles”, confirming the wine as one of the best in the world and one of only 18 Spanish wines to be awarded a “Grand Gold”. Nowadays, “Castillo de Almansa” is flanked by other wines from Bodegas Piqueras that are enjoyed around the world: “Marius”, “El Abuelo”, “Piqueras”, “El Picoteo”… but it is “Castillo de Almansa” that will always be part of the history of the winery, a living legend that was there at the outset, is there now and will be there at Bodegas Piqueras in the years to come. A future that, of course, that will see us set out alongside the majestic and unique Castillo de Almansa, as we have been doing since 1972.