Bodegas Piqueras achieved further recognition at the Decanter World Wine Awards 2021, the latest edition of the world’s most prestigious and rigorous wine competition. This year, Piqueras VS, this time for the 2017 vintage, has once again won a silver medal, achieving a score of 91 points, emulated by Piqueras Gold Label 2018 which was also awarded another silver medal and a score of 90 points.

Here, Piqueras VS deserves special mention as it is the third consecutive year it has won a medal at the Decanter Awards, regarded by many as one of the most stringent wine competitions in the world. At this year’s event, which took place in London, more than 18,000 wines from over 50 countries were rated by more than 170 experts.

Piqueras VS previously won a bronze medal in 2019 and followed this up with a silver medal in 2020 for the 2016 vintage, and this latest rating from the competition jury confirms the wine’s standing as a flagship red wine from the south-east of Spain. For its part, Piqueras Gold Label confirmed its position among our top-rated wines at international level with these 90 points, after also achieving a high rating at the 2021 Gilbert & Gaillard Awards in France. 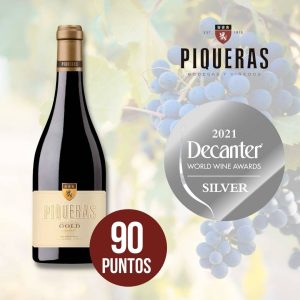 Juan Pablo Cantos, head winemaker at Bodegas Piqueras, highlighted the significance of Piqueras VS “repeating the award for the second consecutive year at Decanter, along with the fact that each new vintage receives a higher rating,” confirming that “as well as establishing itself as one of the standard-bearers of our DO Almansa after just three vintages, Piqueras VS continues on its steep upward curve at international level.”