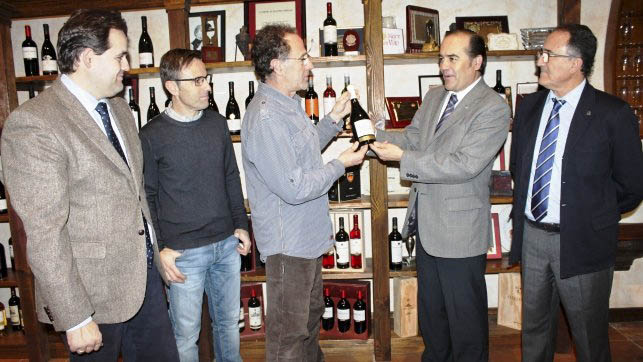 As part of our 100 anniversary celebrations, the government delegate in Castilla-La Mancha, José Julián Gregorio, visited our winery in the company of the mayor of Almansa, Francisco Núñez, and the government sub-delegate for Albacete, Federico Pozuelo. Juan Pablo Bonete, managing director of Bodegas Piqueras, was given the honour of greeting Gregorio on his arrival at Bodegas Piqueras and bringing him up to date about the journey that the company has been on for the last 100 years.

The government delegate stated that it was wineries like Piqueras that put Castilla-La Mancha at the forefront of the Spanish wine sector “a sector that is, moreover, making a great contribution to export growth”. He had good reasons for sayings this, as at Bodegas Piqueras we export 98% of what we produce, and we are the leading Spanish exporter to Canada. The wines of Bodegas Piqueras can be bought in Japan, Sweden, Finland, Norway, Germany, France, the Netherlands, Poland, Belgium, China, Taiwan, the United Kingdom, Mexico, the Philippines, Australia, South Korea, Austria and Switzerland.

Castilla-La Mancha “the vineyard of the world”, continued Gregorio, as the region with the greatest acreage given over to winegrowing in the world, amounting to over 2,000,000 acres, and with exports experiencing continuous growth. These positive figures, according to the delegate, “are due to entrepreneurial individuals, people who have the same enthusiasm now as their forebears had 100 years ago, like Bodegas Piqueras, who make the name of the region, of Albacete and Almansa known all over the world”.

Gregorio underlined the fact that “a hundred years is not within the capacity of every winery, especially when its hallmark is the quality of its wines, like the ones that this company is placing all around the world”. He also expressed his great satisfaction at being able to attend the celebration of the winery’s centenary. The visit to Bodegas Piqueras ended with a toast, heartily endorsed by all, to the future of Spain and its wine trade.